A downloadable game for Windows

The Lightkeeper is an action-adventure platformer inspired by Metroid.

As a newly hired lightkeeper, you set out to investigate strange noises coming from the basement of your house. The story — told through item descriptions and environmental clues — has a Lovecraft vibe, as you discover the cosmic horrors that lie beneath the lighthouse.

The game is complete, with 2 to 3 hours of gameplay. You can explore seven major areas, fight a dozen enemies (including six unique bosses), and discover many powerups and keys to gradually unlock the world map.

I hope you will enjoy it. Let me know in the comments!

And if you liked The Lightkeeper, check out Legends of Aereven: Lunar Wake, my new Zelda-like!

This is a really cool game. Was sad to see it end so soon. If you see this, do you have any idea how long this took to make, I've recently been learning SDL.

Glad you enjoyed the game! ;)

It took three months (working on mornings, lunch breaks, evenings and weekends) to make the first released version, and another three for the final one (with a thankfully more leisurely pace). That being said, I had most of the tech and tools ready when I started, and had done a few similar prototypes in the past (some enemies are lifted straight from them). Also, I had a soft deadline that helped me scope small and keep me focused and on track, which helped.

nevermind, found it in an old area.
sure hope that we will get a sequel one day :-9

Hey, I replayed the game, more or less going through it pretty easily.
there is still stuff I dont have/get:
the last item
then there is the one place bottom right where there are 4 pictures shown (3 are the 3 bosses and have a red light besides them. forht one has a green light and I am not sure if it's a boss and item or whatever. kind of expected to stumble upon that last thing when backtracking but no idea. looked literally everwhere systematically)
and obviously the new dimension :-)

but mostly the last item and the 4 pictures with lights next to them, suggesting to me that there should be a forth boss that I havent defeated yet and that something will happen there afterwards.

You're in a Jailkeeper's ship so... could it be the panels are displaying the prisoners and their status? Maybe a green light means the prisoner is still safely in custody, but a red one indicates they escaped? :o

I'm goofing around, but don't worry: you've already defeated the boss with the green light. (It was the big eye thingy! That panel is a bit of foreshadowing for the final boss, and one of the many hints for the shocking reveal!)

I'm guessing the item you're missing is a Trophy, either for a secret boss or the reward for collecting all the Strange Eggs. If it's one of the bosses, one of them is behind a closed door in the temple, and the other is buried under a tombstone. Hope this helps!

Great metroidvania, but when I gave the small egg man 6 eggs, I got the item as normal. I talked to him again immedatey after getting the item, and it said I had all 9 eggs, even though I didn't. Please fix this!

How many eggs do you have in your inventory? (There's a counter just below the item's description)

Super fun metroidvania, so happy that I got to play it! Perfect 5 stars, I could only wish for it to be longer. Managed to find and explore everything too.

I enjoyed getting all the collectibles and finding the hidden bosses, there was a surprising amount of endgame content. My one nitpick is that some of the rooms had me walking straight into enemies as I soon entered them, which felt a bit unfair. Other then that it was enjoyable throughout!
Well done to the developer! :)

how much shots does it take? or something

If you don't have it, the "Magnetic Core" upgrade is a big help for this fight. ;) 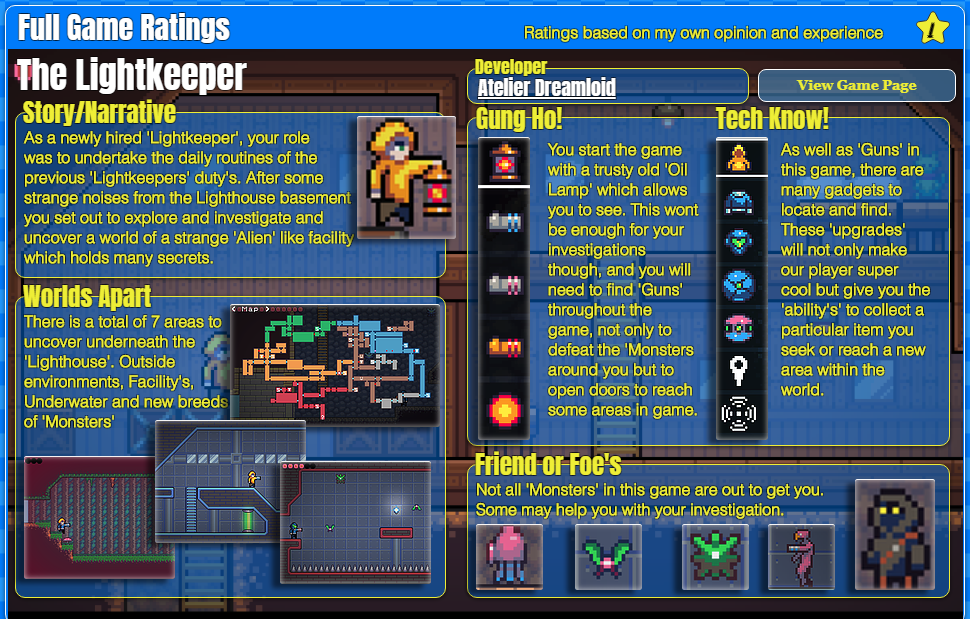 It's an amazing game. I got it a couple hours ago and alearedy finished almost everything. i'm only having trouble finding one last Health Gem, a trophy and a key. The world building is incredible and the hidden boss is actually really hard. Good job!

There is a typo in the beginning, it's predecessor and not precedessor. Just a tiny thing though, the game looks awesome!

This is a really nice game! Its well-made.

The art style is great although certain lasers from certain enemies seem out of place...

From the files I see you did this with SDL!

How long did that take you!

Thanks, glad you liked it!

Yep, the gameplay code is C#, but the low-level code is C++ with SDL2 and a custom OpenGL renderer.

I did not really track development time, but I made The Lighkeeper on my spare time, and started around November of last year. Released it near the end of January. Then I updated it regularly ever since. So yeah, a few months of hard work. :)

The game is amazing nontheless! Your hard work really shows.

I think I saw some small typos here and there so keep an eye out I guess?

Looking forward to your next project!

English is not my native language, so yeah, typos are entirely possible. I think I fixed a few of them, so thank you for warning me. :)

I don't use MonoGame, no.

hey man really enjoying the game ! Im just not sure why I'm not allowed to crouch and move at the same time ? Or is that not possible ? Im on Windows 10 playing with a keyboard.

Yeah, you can't just crouch and move... initially. In true Metroid fashion, that's what the Morphball power-up is for. Keep exploring, and you will find it. ;)

What is last item? I see no closed doors or cutted areas on map.

It's really hidden secret or just missed by me? 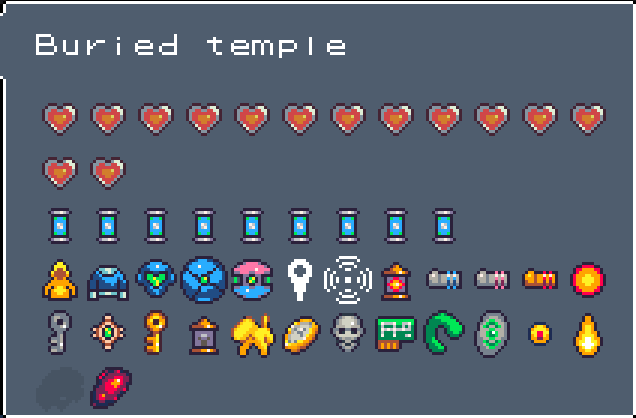 It is a secret. Now that you have all the other items, there's a certain place you should revisit. I'm not telling which one, though. ;)

I found, thanks. And thanks for your game! (Sorry if you spammed by my replies, i many times misclicked and delete messages).

I've looked everywhere twice and then some, but an't find the last trophy I need! Is it possible you could give a small hint or release a walkthrough? Thank you in advance!

Slightly buggy controls (i play with keyboard), but enjoyable gameplay!

I get mmm artifact or something in tower at ground level without double jump, but has been very angry... (I seen up arrow while jumping from table, and try until get it. I think it's just difficult barrier) 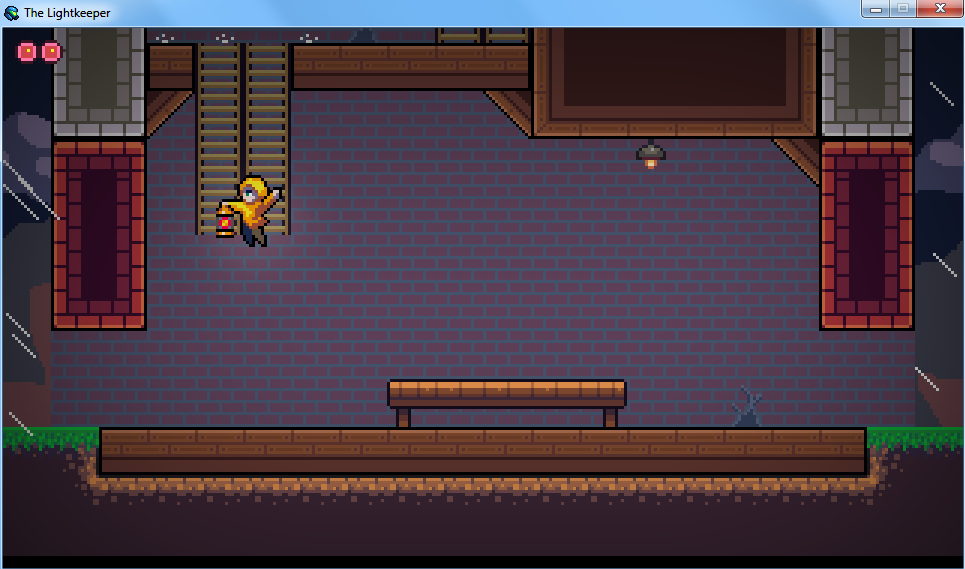 Finally got to play and did a livestream. It would have been cool to have thumb stick movement and the ability to shoot upwards. :)

This was quite an enjoyable little game!

Playing with an Xbox controller, it is much less ergonimic to have B be the shoot button, instead of X like pretty much every other action platformer. It would be great if there were an option to modify the button actions. Or else change to the standard A-jump X-shoot control scheme.

Yes, I plan to add customizable button mapping in a later update. Right now, you can also use the RB trigger button to shoot. I find it easier that way. I know it's not explained anywhere... I also plan on adding a better summary of the controls. :)

Oh, I didn't know about the right trigger. That should be much less awkward. Thanks for the reply.

A really great game! It took me some time to find all the stuff. 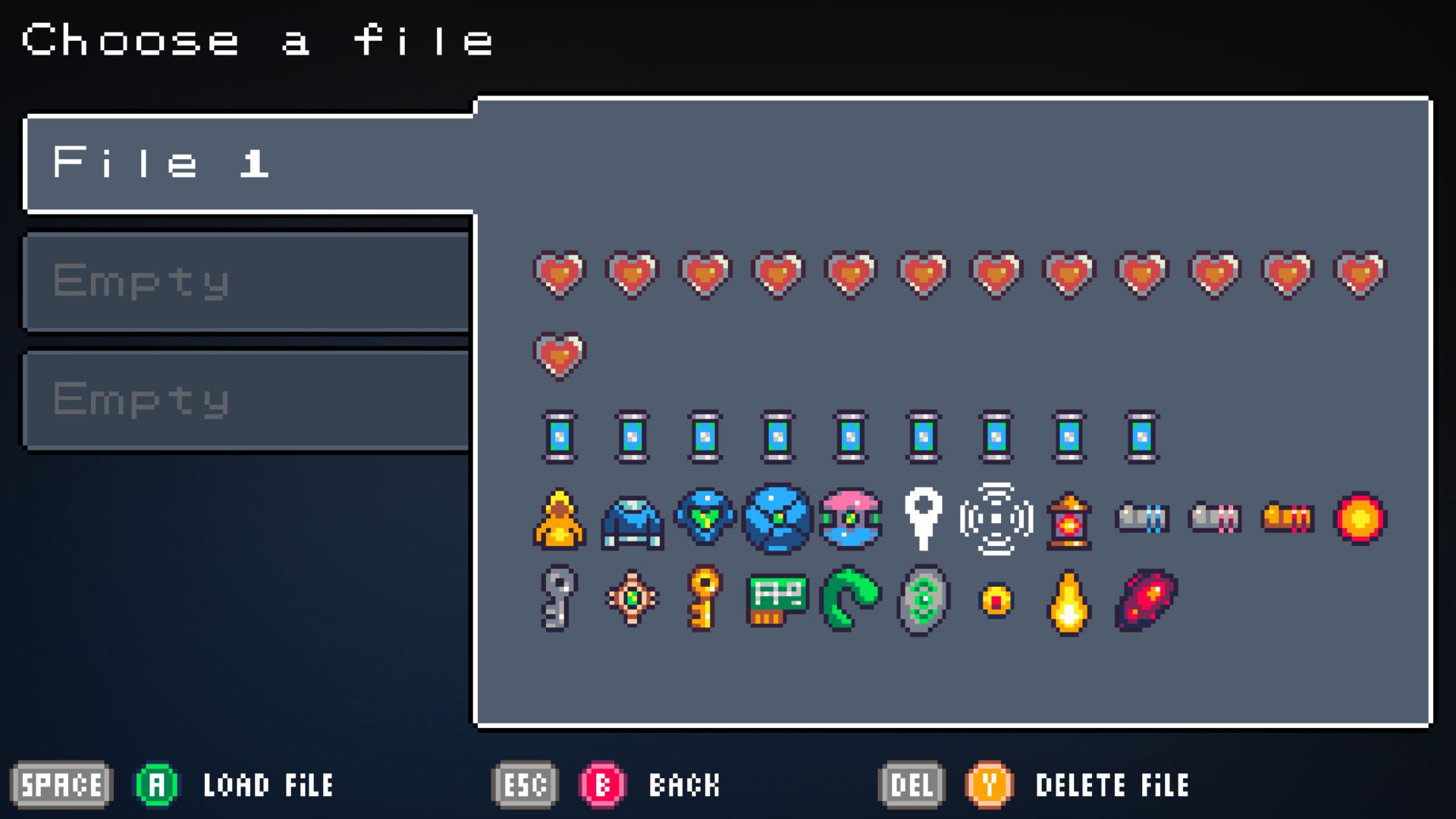 is this really the end?
cause there are many loose ends, at least missing 2 upgrades, etc.

Did I miss something?

For example I never got the morphball :-/

nevermind, went back to the source and found everything.
Looking forward to that new dimension :-)

As you found out, some upgrades are completely optional. But if you finish the game with all items, you get a slightly different ending. ;)
I'm glad you liked the game! I do plan on fleshing it out and adding new areas in the future ;)

Could you tell me how it happened? I may be able to fix it :)

there were 2 things:
1. at the first checkpoint, had gotten nothing until then except the blue gun (obviously).
there are 2 ponds left and right of the checkpoint.
walked into the right pond. got stuck.
couldn't change direction , couldn't jump.
just stuck.
had to go to the main menu and load the file again.
and avoid falling into thatz pit when entering or leaving that save point room.

played the game much further, havent tried it anymore after  getting more equipment.

2. not sure how to pinpoint the place:
there's some long vertical coridor.
2 exits (left and right) at the bottom.
right one is a blue door, leading to a savepoint.
left door is a red one.

Well, since there were tons of places to investigate at the start, right after getting the blue gun., I managed to walk to the same spot.
first entered right door. saw savepoint, saved.
went out.
couldnt destroy red door.
okay, back i guess.

well, couldnt jump up there either cause jump upgrade was needed.
and I well, after coolecting the blue gun, directly walked there without getting any other upgrade.
so I was stuck there since I had saved and had not the upgrades to get out of there again.

not sure if I did something special to get there.
just followed the normal path.


Edit: just played the game again.
2. the mentioned spot is where the entrance to that violet place is (where you also fight a harder version of the first boss again.)
walked the path again.
you basically go into the first availlable long corridor, all the way down, to the left, again all the way down. and you're stuck.
from what I see just letting you fall all the way down there can get you stuck.

okay, maybe the 3 turret thing and all the enemies should have killed me by then.
But with having collected the reachable health ups and simply avoiding damage got me there :-)
1. just checked again (after having most items, at least more than 50% of them).
first when I jumped in, it seemed normal, could move left or right in that pond.
however when I moved against the right wall of the pond, I got stuck.

guess that's a thing with the collision detection between the character and the wall that gets me stuck there.

okay, to be precisely:
you move into that right pond.
you move to and against the left (or right wall) .
you jump.
characters raised his arms, but doesn't move upward and is stuck.
no input makes him move again.
only titlescreen and reloading the thing helps.

Edit: regarding 1.:
I found another such point.
you know where you exit the violet area upwards into the orannge one?

yeah I just exited there, saw that I need to learn to crawl first and went back into the first screen of the violet area. when exiting the water to the left, it happened again. 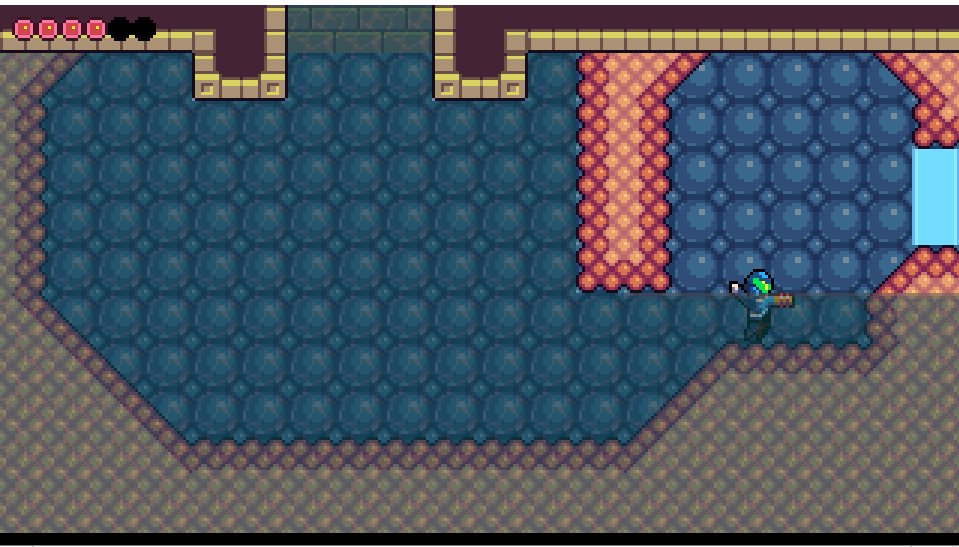 Thanks for the detailed report, it's very helpful! :)

For problem 1, I've seen people having trouble jumping out of the water. The character would sometimes 'stick' and you would have to press jump again to leave the surface. But I've never seen someone ending up outright stuck. I need to investigate this further...

For problem 2, couldn't you use the ladders to get up to the main hub?

Again, thank you for your feedback :)

Oops! I uploaded the wrong version...
The new version should be OK.
Thanks for letting me know! ;) 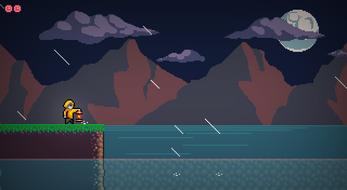 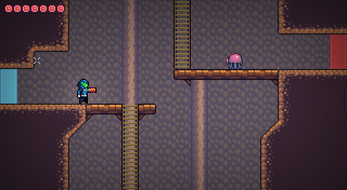 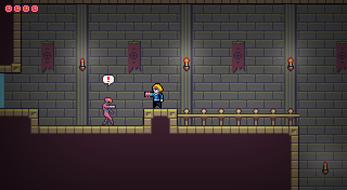 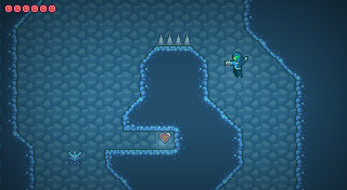 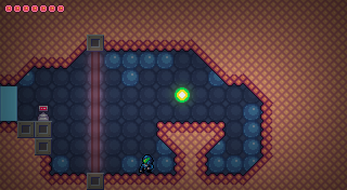 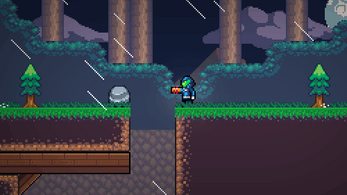