A new version of The Lightkeeper is available!

It contains mostly bug-fixes, but also a few additions:

- First, I tried to reduce confusion about the ladders in the lighthouse. You see, you're not supposed to reach them until you get the double-jump. If you climbed on the table, you could get close, but not grab them. Or so I thought! Turns out, you can grab the ladder if your timing is exactly right. At first I thought it was a harmless bit of sequence-breaking for those who achieved it. But what wasn't so harmless was the Up indicator showing up during the jump, because it made people think you were supposed to reach the ladder, and growing frustrated when they attempted it. So I moved the table a bit to make it very clear you need the double-jump. 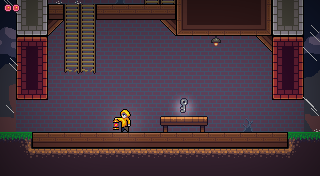 - While we're talking about reducing frustration, I added the doors on the map. That way you can more easily tell where you can go after obtaining a new gun. It's particularly useful considering that it's easy to misremember a purple door as being red, or vice-versa. 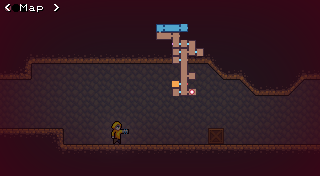 - I nerfed the "Boomheads" a bit. To be specific, they now have a fixed max-range and will explodes on their own if you outrun them.

- I added a hint on how to use the Morphball. It's the same controls as Super Metroid, but turns out not everyone is familiar with that game. (Shocking, I know!)

- I added a separate "Music volume" slider. Also, I added some ambient sounds while you're exploring. Hopefully it will stop people from thinking the absence of music is a bug. (I would love for the game to have a full soundtrack, but that's outside my reach.)

- Thumbstick support! Yay! Finally! Also, the X button can now be used to shoot, in addition to B and RB.

- And let's not forget the bugfixes.

So, quite a bit of QOL improvements! Hope you enjoy this update. ;)

An action-adventure platformer inspired by Metroid and Lovecraft